Welcome back to our second edition of what happened, “This Week In Social Media.” Based on the news this week, perhaps we should be calling this second post, “This Week In Facebook.” The social media giant announced a few ad adjustments this week that will create more options for paid advertisers and organic marketers alike.

Perhaps the most exciting news of the week was Facebook releasing targeting options for organic posts. For the past two years, Facebook has been slowly smothering organic reach making it tough for small businesses to compete against paid advertisers with ample budgets. Many Facebook marketers have coined the change as a ‘pay-to-play’ movement, meaning that if you want to advertise on Facebook, you’ll have to spend some money to reach your intended audience.

As it turns out, Facebook hasn’t completely written off organic marketers just yet. “Organic Audience Optimization” will give marketers an avenue to target their organic posts to the appropriate audiences. At first glance, the new feature reminds us a lot of the targeting for boosted posts. It allows you the ability to target based on interests, location, gender, age, and language, which is exactly the way boosted post targeting works.

The question everyone is wondering is, “How much will this expand reach on organic posts?” Although nobody (except Facebook) can be entirely sure for now, we find the announcement promising for organic marketers and their current reach dilemma. Our only hope is that there is a strong correlation between targeting quality and reach, thus creating a surefire approach for organic marketers attempting to compete with paid advertisers for timeline space.

Last October, Facebook announced a new ad option known as “Lead Ads” which gave advertisers the ability to ask for user’s contact information, without ever making them leave Facebook. After they were released, we immediately tested them out through our own Facebook Ads. We found that lead ads were reducing our cost-per-lead by about 30% – 40% in most cases, which was great. However, we also found the quality of those leads to be significantly worse than our traditional ads, which sent users to a landing page and asked for their information there. Why? Many people we’re confused as to what they were actually signing up for. About 25% of the leads thought we were Facebook. In all fairness to them, the lead submission pop-up seemed more like Facebook asking for information, rather than a ‘business’. Another good majority of those leads were not at all ‘invested’ in who we were or what we do and many even forgot what they signed up for at all. Reason being, lead ads are vague. Sometimes it pays to have users read a more detailed landing page, so they know exactly what they’re getting in to, before they sign up.

The good news? Facebook seems to have taken notice to the problems us advertisers were experiencing with lead ads. The most notable change being the ‘context card’ (see below) which will serve as intermediate page between the ad and the lead submission page. The context card will provide more information to the user about the business behind the ad, so that they can be sure they know exactly what they’re signing up for before give their information. While I’m never a fan of adding extra steps to the user experience, in this case it seems extremely beneficial to provide more information, as the lead ad process almost felt rushed in the beginning causing confusion for many users. So while your cost-per-lead might increase slightly on lead ads, this change is sure to strengthen your lead quality from these ads. 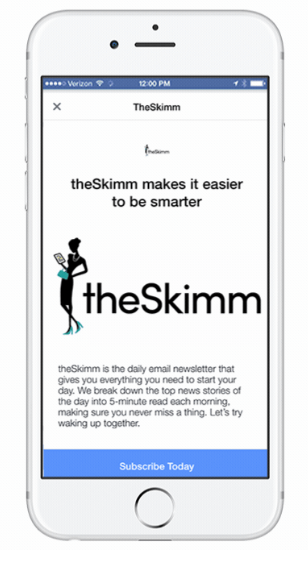 How to Do Local SEO For Your Small Business