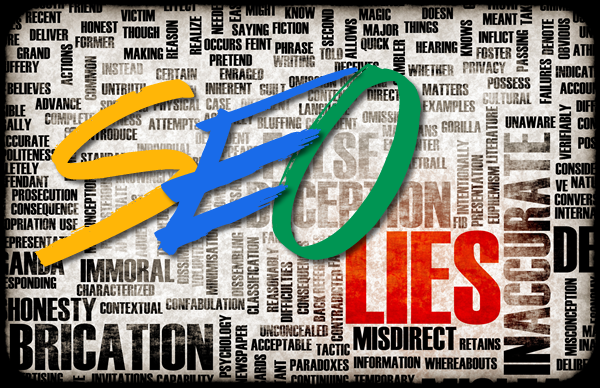 In light of that, let’s talk about YouTube spam, starting with a key phrase near and dear to our hearts.

Tens of thousands of views from a few hundred searches …

YouTube action on this phrase tells a different story. The YouTube videos that rank for “Denver SEO company” have tens of thousands of views. But the term only gets a few hundred searches a month.

That must mean tens of thousands of people are going directly to YouTube and searching for “Denver SEO company” to watch these videos. Either that or the link was sent to a pretty big list, and a fair number of people from that list clicked through to watch. To give them the benefit of the doubt, we could say that the people who found the videos using Google shared them on other channels and people watched them from there.

I’m not that kind.

I’m certain the people who make these videos simply pay people to view them and leave comments, hoping you’ll see them and think they’re legit. They’re not.

It’s not just a Denver thing

“Los Angeles SEO company” gets 6600 searches, yet the YouTube videos for the term have hundreds of thousands of views, hundreds of upvotes, and dozens of comments. People created new Google accounts just to comment! It takes a really good video to attract that kind of attention. Except these aren’t really good videos. They look like someone made them out of stock photos and royalty-free elevator music. They look like someone made them using PowerPoint. Even when someone breaks out a camera and points it at something, they don’t seem to care how their video comes out.

Many of the comments come from overseas. For some reason they like to comment on the same day or within a very short time of one another. Nothing about this feels or looks natural. Because it’s not. It’s pure manipulation, 100% spam.

I’m not going to lie to you. The first thing I thought was “maybe I should do this for my clients.“

It’s brilliant in its way. You can wear the black hat without consequences.

There’s no reason not to spam up a poorly produced YouTube video with description links to a site. With one exception.

It’s the video version of writing 400 word articles as fast as you can and getting them posted on whatever site will take them, quality be damned.

Stuff like this is the reason SEOs and IMers have a bad name. When it worked, lots of people made lots of money doing stupid, meaningless things on the Internet. They felt really good about themselves. Everyone thought they were really, really smart because their stupid, meaningless SEO tactics worked well and made them lots of money. Everyone got to walk around looking pretty smug for a while.

Until 2011, when Google’s petting zoo smacked the smug looks right off of everyone’s faces. It’s flat-out stupid to use the same tactics in 2014 after so much has changed.

It’s the same shady, supposedly “algorithm proof” crap people have been doing for years, only to get hit by the next big update. 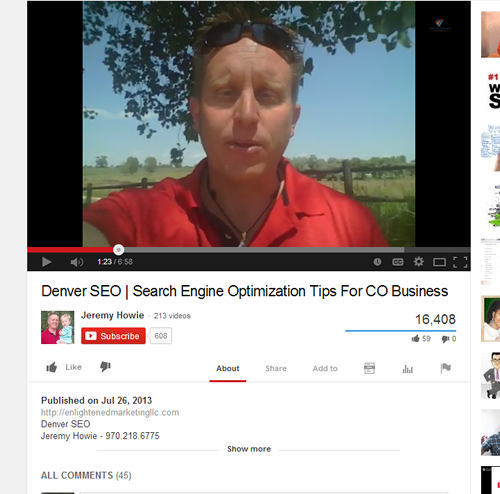 I don’t know Mr. Howie, but I assume he’s a big boy who can roll with the punches. If he claims his video works for him, more power to him. That he might claim it works is not going to stop me from calling him out for wearing his sunglasses like a hair barrette, among other things.

Out of 45 comments, 37 of them were posted around the same time 7 months ago. Here’s a sample, so you don’t have to click through:

Cheap shots about Mr. Howie’s shades aside, can you spot any patterns in the comments?

Everyone praised Mr. Howie for adding great value. When they weren’t busy praising him, they desperately wanted to get in touch with him or find out how he got his video to rank.

Imagine if this was how it really worked. We’d all be one bad YouTube video away from having dozens of qualified prospects kicking down our doors to do business with us. It’s too bad Mr. Howie’s video is faker than all of my ex-wives combined, and I’ve never been married to anyone.

How to be an Internet ninja

It’s easy and doesn’t involve any difficult coding tricks or anything like that.

You’re going to need a Fiverr account and a Paypal account with $20-$30 in it. Go to Fiverr and search for people who sell YouTube comments and views. Search for someone who builds links. Follow these three steps and don’t worry about being careful about anything:

Give it a couple weeks.

When it becomes painfully obvious your stupid video isn’t generating demand for your services, think long and hard about how you can spend your time more productively in the future.